Dr. Henry and Elder Sherry Roberts
Henry W. Roberts, Jr. is the son of Mrs. Theresa M. Roberts and the late Mr. Henry W. Roberts, Sr. He is a native Mobilian and a graduate of McGill Toolen High School. He obtained his Bachelor of Arts Degree in Fine Arts/ Communication from Dillard Universtiy in New Orleans. While continuing his education in pursuit of a Master of Divinity Degree from the New Orleans Baptist Theological Seminary, Dr. Roberts received his Doctorate of Ministry and Ph.D. in Religious Philosophy from Friends International Christian University. Dr. Roberts was led of God to become a home missionary and began planting churches where the Lord would lead. He co-founded the Kelly Land Baptist Church in Alexandria, Louisiana. After establishing this work, being led of God, he moved to Flomaton, Alabama and started the Community Baptist Church.

Seeing a need in the area of youth ministry, Dr. Roberts was called to Southern Normal High School in Brewton, Alabama to be the Dean of Students and Campus Minister. After obtaining tenure there, he was called to a larger campus with a student population of over 700 at the Piney Woods Country Life School in Piney Woods, Mississippi. While there, he served as the Dean of Students and Campus Minister.

Later, the Lord moved Dr. Roberts back to Mobile where he worked in the Mobile County Public School System and served as a Special Education instructor. Still under divine guidance, Dr. Roberts was called to pastor the Word of Life Community Church. On July 18, 1992, the church held its first worship service with eleven people in attendance. Since that time, Dr. Roberts has pastored the Word of Life Community Church in multiple locations (including Whistler, Chickasaw and Brewton, Alabama as well as Gautier, Mississippi) serving thousands of people in the Gulf Coast regional area. He is a renowned teacher/speaker with radio and television ministry that reaches thousands in Mobile and surrounding areas. In 1993, Dr. Roberts founded the Word of Life Christian (Bible) College to prepare men and women for service in the Kingdom of God. Also under the leadership of Dr. Roberts the following programs have been established: a child care center (Word of Life Learning Institute), a free tutoring program for all ages, an adult education program for those individuals interested in obtaining or completing their high school diploma, a Street Ministry, and the Word of Life Christian School (K-12). 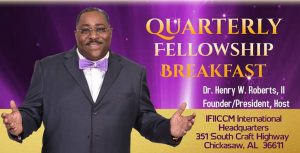